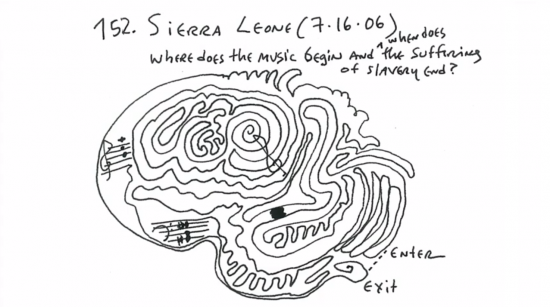 This drawing may look like a maze or an artist’s sketch, but it’s actually a musical score created by Emmy-award-winning composer Steve Heitzeg.

A few years ago pianist Teresa McCollough received a surprise gift in the mail from Heitzeg: 192 scores titled World Piece. Each score was named for one of the 192 countries in the United Nations at that time and made a political or environmental statement through one chord, or a few notes beautifully expressed through Steve’s evocative drawings.

“World Piece arrived during a very difficult time in my life,” Teresa told me via phone this week. “I couldn’t believe that he had kept the project a secret for so many months. I cried when I opened the package.”

From the very beginning, Heitzeg conceived of the project as a thank you to McCollough. Heitzeg describes the evolution of the idea:

In 2000 Teresa McCollough had a call for scores for her new CD of music for solo piano by living American composers listed in the American Composers Forum newsletter. I submitted my Sandhill Crane (Migration Variations) and fortunately, I was one of the composers selected for her CD New American Piano Music that was released on the Innova label in 2001. Since the release of that CD she has performed my Sandhill Crane numerous times internationally–from China to Canada. She would always send me programs from the performances, too. So, I wanted to send her a thank you for her kindness.

I had been ruminating about composing a piece about world peace. Then, one day while walking through the Barnes and Noble in Minneapolis, I came upon Lonely Planet’s The Travel Book: A Journey Through Every Country in the World.  I thought I could honor each country in the world with a brief chord or gesture. The UN works tirelessly for peace and most of the countries in the world are member states, that is why I chose the UN.

I use a single chord or small musical fragments to symbolize the notion that the smallest acts of kindness can change the world in a positive way. 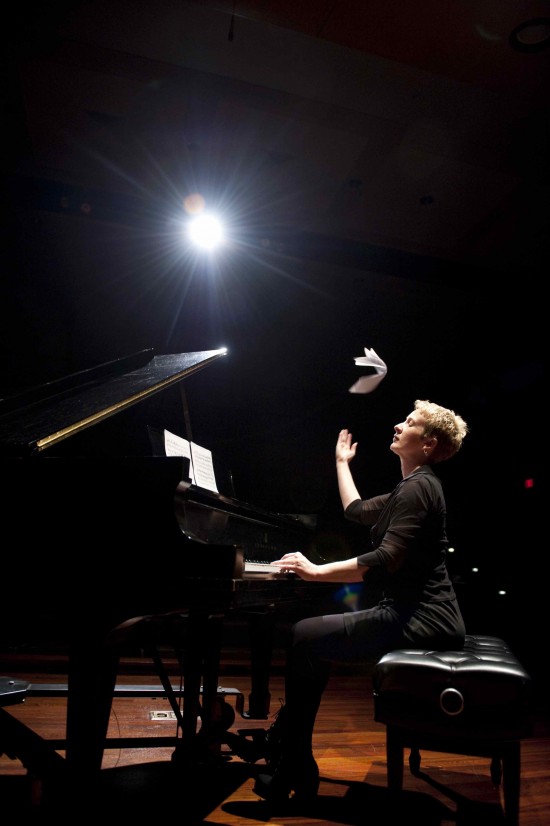 “When I was in school, the only people who were doing improv were jazz players, and the jazz world and the classical worlds never met.” (Photo: Pianist Teresa McCollough. Image courtesy the artist)

My own discovery of Heitzeg’s World Piece project occurred last year when I saw Teresa perform selections of the work at Roulette in Brooklyn during a concert featuring compositions by Alvin Singleton, Alex Shapiro, and the Wet Ink Ensemble. Seeing each score projected behind the piano as Teresa performed was a memorable experience, and I was particularly struck by how much creative freedom Heitzeg had given to McCollough. (Not every composer is so trusting of performers, and not every performer is up to the task of improvisation). As I talked to Teresa about the evolution of the piece after her Roulette performance, I knew immediately that I wanted to share World Piece with Gwarlingo readers on October 24th: United Nations Day.

Throughout this highly-improvisatory work, McCollough is called upon to play all parts of the piano (the keys, the strings inside the piano, the wood), to whistle, to make animal sounds, whisper and sing into the piano. In the Bhutan movement, she plays a high cluster of chords in honor of “the roof of the world” and the Canadian movement is a tender “song for seal pups.” In a light-hearted moment, McCollough tosses Euros into the piano for the Monaco movement; as a protest to war, she is directed to scream into the piano for the Vietnam movement, which is represented with a black hole in the score.

(NOTE: If you are reading this post in an email and can’t see the below videos, click here to watch the videos on the Gwarlingo website).

Why compose a piece of music for the United Nations? “I&#821