Accused of Harboring an Unlicensed Dog? Take a Lesson from Writer E.B. White

Accused of Harboring an Unlicensed Dog? Take a Lesson from Writer E.B. White

Writer E.B. White and his dachshund Minnie--the subject of White's hilarious letter to the ASPCA

“Analyzing humor is like dissecting a frog,” says the writer E.B. White. “Few people are interested and the frog dies of it.”

It’s been years since I’ve read White’s classic books Charlotte’s Web and Stuart Little. I had forgotten how funny the author could be until yesterday, when I nearly choked on my breakfast because I was laughing so hard at this letter written by White, currently posted on Shaun Usher’s wonderful site Letters of Note.

In 1951 the American Society for the Prevention of Cruelty to Animals accused E.B. White of not paying his dog tax and “harboring” an unlicensed dog. White wrote the following letter in response to the ASPCA…

The American Society for the Prevention of Cruelty to Animals
York Avenue and East 92nd Street
New York, 28, NY

I have your letter, undated, saying that I am harboring an unlicensed dog in violation of the law. If by “harboring” you mean getting up two or three times every night to pull Minnie’s blanket up over her, I am harboring a dog all right. The blanket keeps slipping off. I suppose you are wondering by now why I don’t get her a sweater instead. That’s a joke on you. She has a knitted sweater, but she doesn’t like to wear it for sleeping; her legs are so short they work out of a sweater and her toenails get caught in the mesh, and this disturbs her rest. If Minnie doesn’t get her rest, she feels it right away. I do myself, and of course with this night duty of mine, the way the blanket slips and all, I haven’t had any real rest in years. Minnie is twelve.

In spite of what your inspector reported, she has a license. She is licensed in the State of Maine as an unspayed bitch, or what is more commonly called an “unspaded” bitch. She wears her metal license tag but I must say I don’t particularly care for it, as it is in the shape of a hydrant, which seems to me a feeble gag, besides being pointless in the case of a female. It is hard to believe that any state in the Union would circulate a gag like that and make people pay money for it, but Maine is always thinking of something. Maine puts up roadside crosses along the highways to mark the spots where people have lost their lives in motor accidents, so the highways are beginning to take on the appearance of a cemetery, and motoring in Maine has become a solemn experience, when one thinks mostly about death. I was driving along a road near Kittery the other day thinking about death and all of a sudden I heard the spring peepers. That changed me right away and I suddenly thought about life. It was the nicest feeling.

You asked about Minnie’s name, sex, breed, and phone number. She doesn’t answer the phone. She is a dachshund and can’t reach it, but she wouldn’t answer it even if she could, as she has no interest in outside calls. I did have a dachshund once, a male, who was interested in the telephone, and who got a great many calls, but Fred was an exceptional dog (his name was Fred) and I can’t think of anything offhand that he wasn’t interested in. The telephone was only one of a thousand things. He loved life — that is, he loved life if by “life” you mean “trouble,” and of course the phone is almost synonymous with trouble. Minnie loves life, too, but her idea of life is a warm bed, preferably with an electric pad, and a friend in bed with her, and plenty of shut-eye, night and days. She’s almost twelve. I guess I’ve already mentioned that. I got her from Dr. Clarence Little in 1939. He was using dachshunds in his cancer-research experiments (that was before Winchell was running the thing) and he had a couple of extra puppies, so I wheedled Minnie out of him. She later had puppies by her own father, at Dr. Little’s request. What do you think about that for a scandal? I know what Fred thought about it. He was some put out. 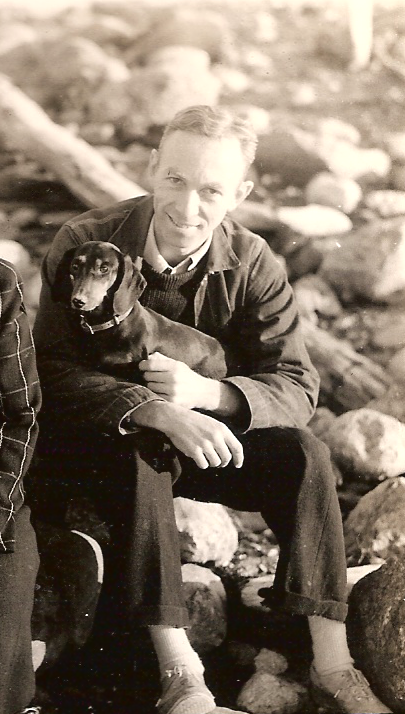 I Was Allergic to Platforms, and Still Am

Elwyn Brooks White grew up as one of six children in Mount Vernon, New York. As Michael Sims details in his article <a href="http://chronicle.com/article/The-Nature-of-EB-White/127630" target="_b