We don’t give much thought to the covers of the poetry books we read, but the genre is plagued by amateurish typography and ill-chosen imagery. Copper Canyon Press consistently has some of the strongest, most thoughtful designs, and Ed Skoog’s Rough Day is the perfect marriage of style and substance.

A 1939 photograph of Skoog’s mother, looking rather displeased with a pet crow on her lap, graces the cover of Skoog’s second collection. It’s an intentional choice, and also a memorable one.

“The book is about a lot of things, and one is trying to reconstruct a sense of self after loss,” Skoog explains to Lillian Nickerson in an interview with City Arts. “For me that’s the passing of my mother almost 10 years ago. How to rebuild the world after rupture.”

The image of the crow is also significant:

One of the effects of being in an uncertain world is restlessness. There’s a thing called zugunruhe. It’s a German word to describe the restlessness of animals before their migrations—the itchiness to get going, the behaviors before leaving. Birds exhibit it; everything that migrates tends to behave a little differently right before taking off on what might be an enormous or fatal journey. So having a crow on the cover, a pet crow, calmly sitting on my mom’s lap seemed to fit. I feel that restlessness. I feel it as a human who travels from place to place. I don’t really feel like I have a home. I have a lot of different places where I belong at certain times. That fugitive nature is something very central to the nature of poetry and poetic language. 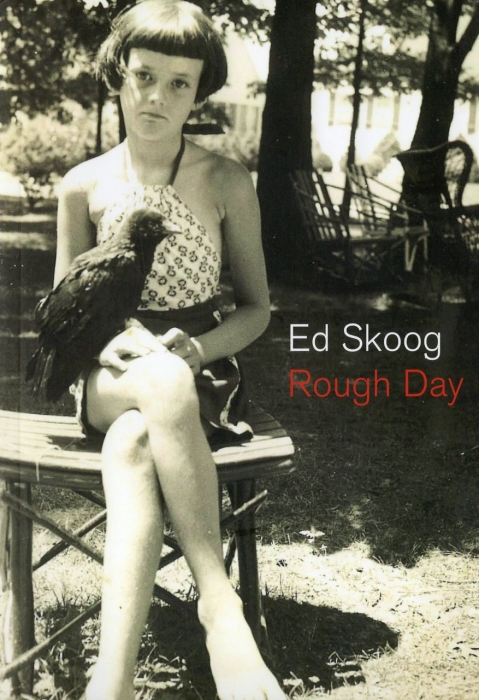 Skoog spent a year in Washington D.C. and wrote many of the poems during regular walks around the city. “The historical marker is a form of guilt / backward meaning / that might pull a muscle in your neck,” Skoog writes in one poem. He could be referring to a city like D.C., or for any other city for that matter.

While reading Rough Day, we are everywhere and nowhere—steeped in reality, but also outside of it. The poems in the collection are both specific and general, comforting and strange. They make us feel simultaneously unmoored and rooted:

Gulliver attends his narrative on the mantel