What the Donkey Saw

No room in the inn, of course,
And not that much in the stable
What with the shepherds, Magi, Mary,
Joseph, the heavenly host –
Not to mention the baby
Using our manger as a cot.
You couldn’t have squeezed another cherub in
For love or money.

Still, in spite of the overcrowding,
I did my best to make them feel wanted.
I could see the baby and I
Would be going places together.

Wise Men are busy being computer literate.
There should be a law against confusing
Religion with mathematics.
There was a baby. Born where?
And when? The sources mention
Massacres, prophecies, stars;
They tell a good story, but they don’t agree.
So we celebrate at the wrong midnight.
Does it matter? Only (dull) science expects
An accurate audit. The economy of heaven
Looks for fiestas and fireworks every day,
Every day.
Be realistic, says heaven:
Expect a miracle.

U. A. Fanthorpe was that rarest of writers: a poet who was hugely popular with the general public and at the same time very seriously regarded by fellow poets and literary critics for her originality, subversiveness, wit and humanity. 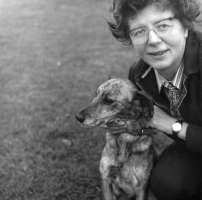 Fanthorpe’s book Christmas Poems, where these three pieces originally appeared, has an intriguing history. Each year between 1974 and 2009, Fanthorpe and her partner Rosie Bailey created and mailed handmade Christmas cards to friends. Fanthorpe would write a brand new poem on the theme of Christmas for the card, while Bailey created the design using a small press with moveable type. In this BBC story, Bailey explains how a shortage of letters on the press created trouble in the early days. At times, Fanthorpe “would write an ambitious poem with too many ‘E’s and have to write another,” says Bailey. Brief poems like “Reindeer Report” resolved the letter shortage.

Ursula Askham Fanthorpe was born in Kent in 1929 and read English at St Anne’s College, Oxford, then trained as a teacher. She was Head of English at Cheltenham Ladies’ College and worked as a receptionist in a neurological hospital, before becoming “a middle-aged drop-out in order to write.” She published her first collection, Side Effects, in 1978 at the age of 49. Her eight volumes of poetry were all published by Peterloo, and her Selected Poems was published by Penguin in 1986. Christmas Poems and From Me to You are available from Enitharmon Press.

A practicing Quaker, Fanthorpe was the first woman to be nominated for the post of Professor of Poetry at Oxford. She was awarded the CBE in 2001 and the Queen’s Gold Medal for Poetry in 2003, when her Collected Poems were published. In 2010 Enitharmon published her definitive volume New and Collected Poems, which features a preface by Poet Laureate Carol Ann Duffy.

To learn more about Fanthorpe, you can read her obituary in the Guardian or visit her publisher’s website.

“Reindeer Report,” “What the Donkey Saw,” and “Not the Millennium” © U.A Fanthorpe courtesy <a href="http://www.enitharmon.co.uk/pag