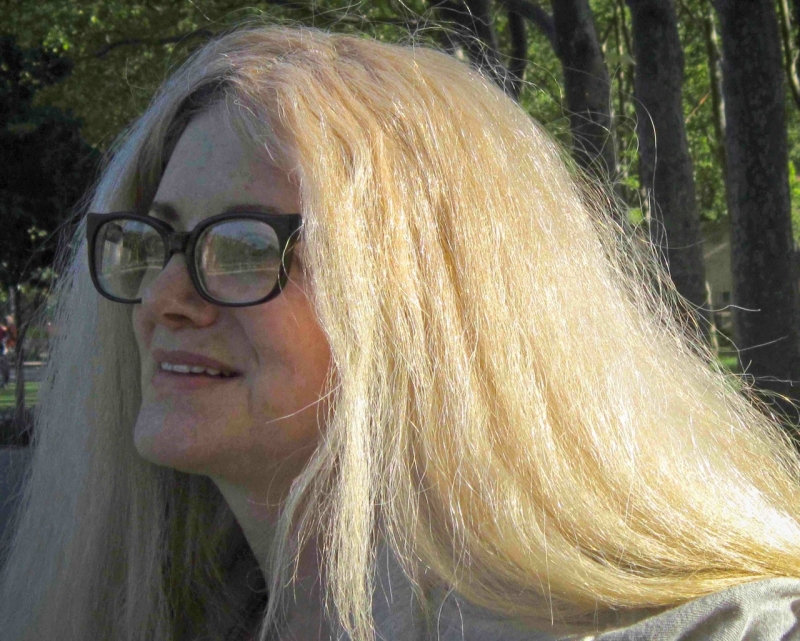 (Note: This introduction and interview with poet and publisher Janet Kaplan are by Adrienne Brock)

While Janet Kaplan has her roots solidly in the New York area, her work reaches into the dirt of both American continents. Born and raised in the Bronx, she was educated at Lehman College of the City University of New York, and at Columbia University, and earned her MFA in poetry at Sarah Lawrence College. She has published three books and two chapbooks. Her second full-length collection, The Glazier’s Country, featured her maternal grandfather as the eponymous glazier. Her collection, Dreamlife of a Philanthropist: Prose Poems & Prose Sonnets, selected for the 2011 Ernest Sandeen Prize, was released in 2011 by the University of Notre Dame Press and was shortlisted for the 2003 National Poetry Series. Her most recent publication is Chronicles, a hand-sewn, letterpress book from Press Board Press with a limited-edition, print run of 100 copies (available here for $10).

Kaplan’s poems lend themselves to performance, and visual and performing artists have seen her work as inherently able to cross genres. The 2011 poem “Matar as Saudades” was presented as part of the YIVO Center installation Writers on View, featuring the art of Sabastian Mendes. A long poem of hers, “Ascending, Descending” was commissioned for a vocal performance piece by classical composer Martin Hennessey.

Her work negotiates the limitations of poetic form on the page while drawing caricatures of people and ideas that almost grate the nerves with their insight into the comedy of everyday activities, conversations, beliefs, and losses.

She is currently at work on a fourth collection while publishing new and established writers under the imprint of Red Glass Books, a limited-edition fine art chapbook series, which celebrated its second anniversary last month. Red Glass Books has published poets like Jean Valentine (her Red Glass Books chapbook was featured here on Gwarlingo), Cornelius Eady, Elisabeth Frost, and others.

Kaplan spoke with Gwarlingo about promiscuity, surrealism in texting, and a hungry poet’s choice of day jobs.

Also included in a special expanded version of this week’s Sunday Poem feature are five poems from Dreamlife of a Philanthropist and four poems from Chronicles.

I’ve known great happiness. “Pound” abbreviated “lb,’ the word “salary” drawn from “salt.” I’ve unearthed a wealth of examples like these, shy examples that don’t want to be discussed. Some people are happy lying low. They’re happy as Cambrian-era RNA. Others shake their fists. Their eyes well with tears. Shall I crawl beneath my mother’s feet because cabbages no longer grow on Broadway? It’s Sri Lanka now but the tea’s still called Ceylon. Some elements come together to form compounds; then you can’t get back to the elements to save your life. Not without the proper, very expensive tools.